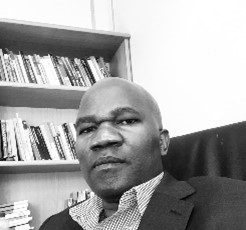 Dumisani Moyo is currently Executive Dean Academic in the Faculty of Humanities at North West University. He earned a doctoral degree in Media and Communication Studies from the University of Oslo in 2006, after completing a Master of Philosophy degree from the same University in 1998. Prior to that, he had completed a BA Honours in English degree (1991) and a Post-graduate Diploma in Media and Communication Studies (1995) at the University of Zimbabwe. His previous professional experience includes Senior Lecturer and Head of Department at the University of the Witwatersrand; Visiting Lecturer at University of Addis Ababa; Research Fellow at the University of Oslo; Fulbright Scholar in Residence at the College of Lake County and William Rainey Harper College, Illinois; and Lecturer at the University of Zimbabwe. Prior to joining NWU in 2021, Moyo served as Vice Dean, Teaching and Learning at the University of Johannesburg. Before that, he worked as Regional Programme Manager, Media and Access to Information at the Open Society Initiative for Southern Africa (OSISA), and as Africa Regional Manager for the World Association of Newspapers and News Publishers (WAN-IFRA)’s Strengthening Media and Society Project between 2010 and 2016.His research interests include media policy and regulation; and media, politics, culture and technology in Africa. His major works include four co-edited books: Radio in Africa: Publics, Cultures, Communities (Wits Press, 2011); Media Policy in a Changing Southern Africa: Critical Reflections on Media Reforms in the Global Age (UNISA Press, 2010); Mediating Xenophobia in Africa: Unpacking Discourses of Migration, Belonging and Othering (Palgrave, 2020); and Re-imagining Communication in Africa and the Caribbean: Global South Issues in Media , Culture and Technology (Palgrave, 2021). He serves as a board member for a number of international organisations, including the African Studies Association (ASA); the Institute for Pan-African Thought and Conversation (IPATC); the Media Monitoring Africa (MMA) and the Investigative Journalism Hub (IJ-Hub) where he is currently Board Chairperson.